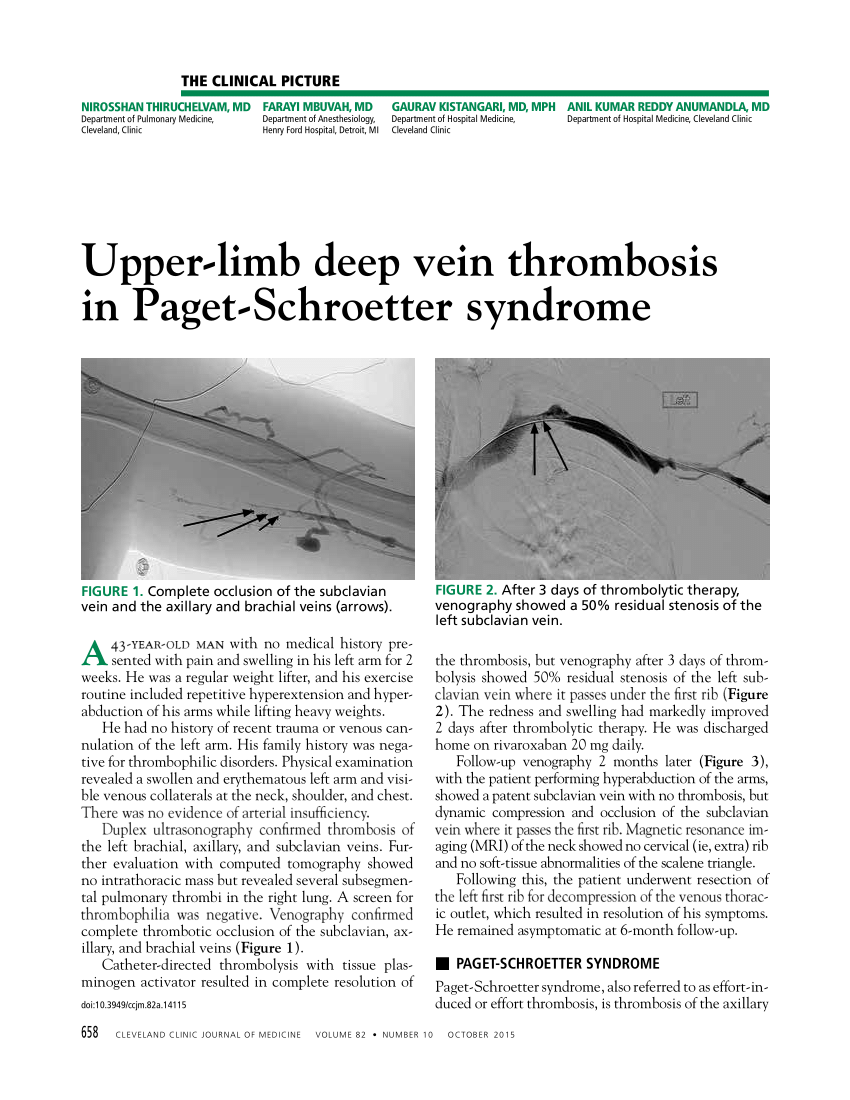 Very few documented cases of primary or spontaneous ASVT in absence of clear factors and in such anatomical location have been previously reported. Conclusion In addition to the unusual location in the left upper extremity in our case, the absence of common etiologic factors makes our case of Paget-Schroetter Syndrome a very unique one. 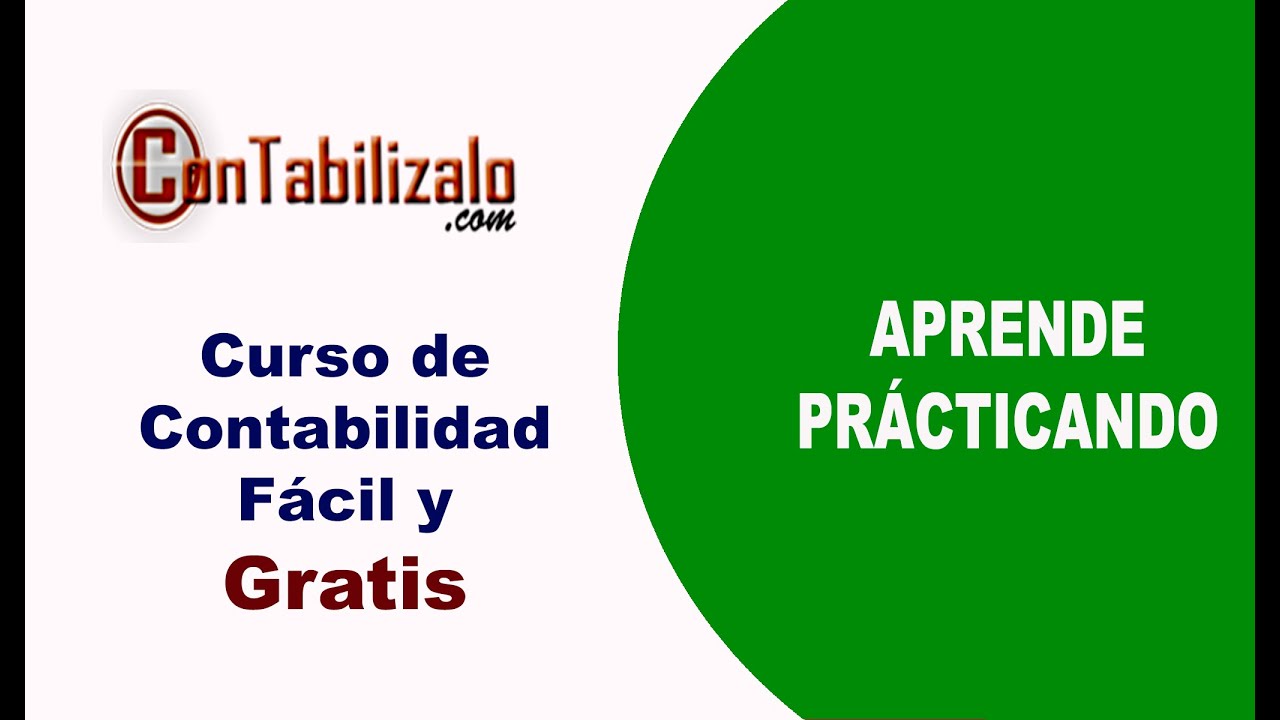 Presently, there is a lack of guided management of rare conditions such as our case, or consensus among the sources. Physicians should be aware of this rare disease since untreated conditions may be debilitating for the patient and very costly especially if diagnosed with a delay.

Background Paget- Schroetter Syndrome involves axillary-subclavian venous thrombosis ASVT associated with strenuous and repeated activity of the upper extremities [ 1 , 2 ]. PSS is usually experienced after sporting activities such as swimming, wrestling and gymnastics which often involve vigorous and continued movements of the upper extremity [ 2 ].

It is believed that retroversion, hyperabduction and extension of the arm involved in strenuous sporting activities impose undue strain on the subclavian vein; which leads to micro-trauma of the endothelium and activation of the coagulation cascade. Consequently, it is not unusual that PSS usually occurs in the dominant arm of young, healthy and active men [ 2 ]. Patients with PSS are customarily symptomatic, with swelling and arm discomfort being the most frequently reported and presented problems, as shown in Table 1 [ 2 , 6 — 8 ].

Often the symptom onset is either acute or sub-acute, however, occasionally, patients can present with chronic symptoms [ 2 ].

In addition, not uncommon symptoms can present as nonspecific and at times mimic those of a muscular strain [ 2 , 9 ]. Venography via computed tomographic CT or magnetic resonance MR can also be performed in the setting of atypical symptoms or equivocal ultrasound to interrogate the surrounding anatomy.

However, both have their drawbacks.

CT venography is complicated by risk of contrast and radiation exposure, while MR carries high costs and limited availability. When faced with an inconclusive non-invasive ultrasound and high clinical suspicion for upper extremity DVT, providers have the option of choosing among the above venography techniques. Alla et al. 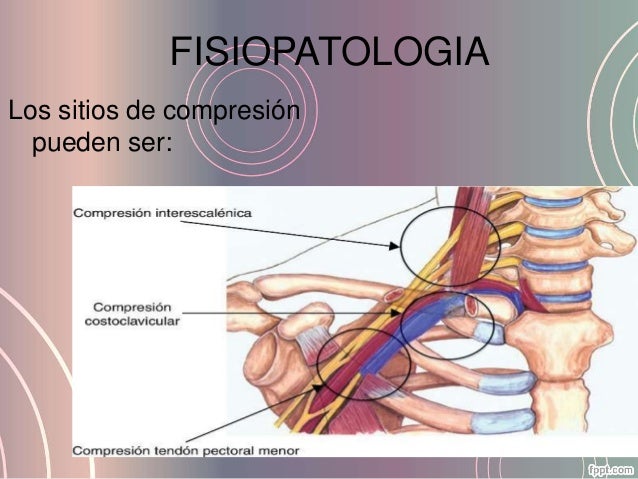 A positive MR venogram is then followed by catheter-directed thrombolysis and early thoracic outlet decompression in patients with symptoms present for less than 2—6 weeks 8. As PSS is a rare disorder, no guidelines exist on routine D-dimer testing.

It may be useful as an adjunct, but is not recommended as a confirmatory test Patients complaining of neuropathic symptoms warrant nerve conduction studies, although the venous swelling can sometimes produce paresthesias unrelated to neurogenic TOS 16 , Routine hypercoagulable workup for upper extremity thrombosis is not recommended.

Hypercoagulable investigations include mutations in factor V Leiden and prothrombin GA, and deficiencies in antithrombin, protein C, and protein S. Cancer screening following unexplained upper extremity thromboses follows similar recommendations for those in the lower extremities. Routine screening is not recommended, however may be considered in unexplained thromboses In these cases, a thorough history and physical examination, routine laboratory studies, abdominal ultrasound, chest X-ray as well as any other age or gender specific screenings should be performed Treatment Treatment of PSS consists of relieving symptoms due to obstruction, preventing complications from DVT, and preventing recurrence.

Initiation of systemic anticoagulation immediately after diagnosis is the first step in treatment. Vitamin K antagonists are recommended over low-molecular-weight-heparin Anticoagulation alone for treatment of PSS is generally not recommended.

A more aggressive approach involving thrombolysis and surgery is superior to anticoagulation alone in patient-reported outcomes, such as resolution of symptoms and return to work 31 , If there are no contraindications, therapeutic anticoagulation for at least 5 days, followed by venography and catheter-directed thrombolysis is optimal if performed within 2 weeks after the onset of symptoms Figure 2 3 , Treatment of a clot older than 2 weeks is less successful as the thrombus is considered chronic and less susceptible to thrombolytic therapy 36 , A Venogram showing occlusion of axillosubclavian vein at the thoracic outlet; B catheter-directed thrombolysis of axillosubclavian clot; C post-thrombolysis venogram demonstrating patency of subclavian vein.

Despite initial relief of symptoms following anticoagulation and thrombolysis, re-thrombosis can occur in up to one-third of patients Therefore, more definitive treatment with thoracic outlet decompression is recommended for patients who are good surgical candidates 39 , In the absence of specific anatomic abnormalities, decompression with first rib resection is performed via a transaxillary, supraclavicular or infraclavicular approach.

No clinical trials exist to support the superiority of one particular approach. If a cervical rib is present, it should also be removed.

If indicated, partial resection of the subclavius and anterior scalene muscle helps to de-bulk the thoracic outlet and prevent recurrence of symptoms There is no consensus on duration of anticoagulation for PSS. Others suggest a more tailored approach using post-operative venography. If vein patency is demonstrated, no further intervention is required and anticoagulation can be stopped.

However, if persistent stenosis or re-thrombosis is identified, anticoagulation is continued and repeat provocative duplex ultrasound examination is performed monthly for 6 months 3 , 41 , Additional measures such as surgical thrombectomy, balloon venoplasty, and stenting have been used in the past for persistent stenosis or re-thrombosis, but have fallen out of favor secondary to poor success rates and high morbidity and are generally not recommended as initial treatment 12 , 43 , It is characterized by pain, heaviness and swelling of the affected extremity and can be a chronic, debilitating condition 21 , It is difficult to prevent all cases of PTS, but data has shown that early treatment correlates with improved patient-reported outcomes.

Urschel et al. Other studies have reported similar findings, supporting the use of early surgical decompression 46 , Patients with VTOS who undergo first rib resection and scalenectomy report improved quality of life, with near full recovery 1 year after surgery However, heterogeneity among studies proved difficult to draw many further conclusions Conclusions Rapid diagnosis and treatment for PSS is essential for good outcomes.

Treatment involves immediate anticoagulation. Venography with catheter-directed thrombolysis can confirm the diagnosis and is potentially therapeutic.

Surgical decompression should follow soon after, both for completion of treatment and prevention of recurrent thromboses. Managed in this fashion, the vast majority of patients with VTOS report beneficial outcomes with near full recovery at 1 year.

Footnote Conflicts of Interest: The authors have no conflicts of interest to declare. Current management of thoracic outlet syndrome. Curr Treat Options Cardiovasc Med ; A comprehensive review of Paget-Schroetter syndrome. 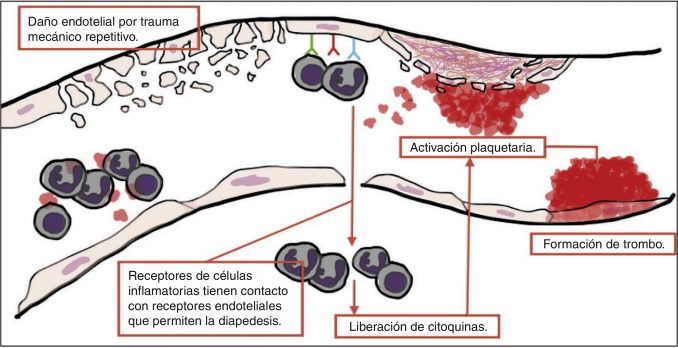 Paget-Schroetter syndrome in the absence of common predisposing factors: a case report

West J Emerg Med ; Conventional versus thrombolytic therapy in spontaneous effort axillary-subclavian vein thrombosis. If indicated, partial resection of the subclavius and anterior scalene muscle helps to de-bulk the thoracic outlet and prevent recurrence of symptoms In addition, not uncommon symptoms can present as nonspecific and at times mimic those of a muscular strain [ 2 , 9 ].

Other studies have reported similar findings, supporting the use of early surgical decompression 46 ,